Most travelling on early Friday ferries but others flying or Thursday arrivals. Graham (from Exeter) or Andy Y by train/plane/train had the most interesting journeys. Antwerp ringroad remains infamous! Great big corporate campsite with all amenities, we were on an area for ‘groups’ and very miscellaneous they were! 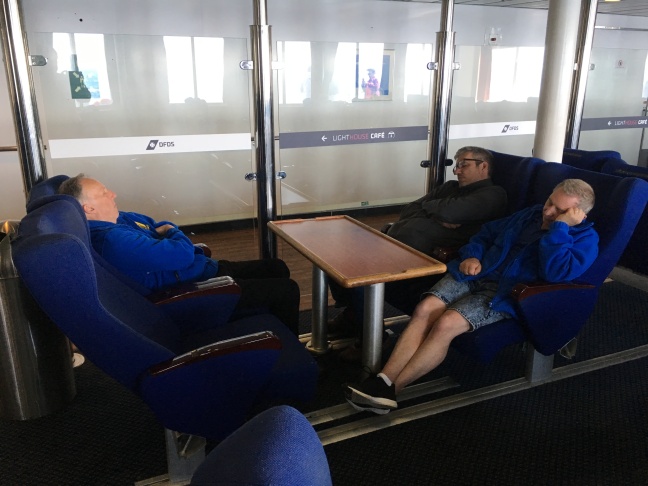 Just time to get the tents up and a quick ‘swally’ before we had to leave for the 1900 rendezvous with our hosts in central Utrecht – walk/train/long walk and a chance to fathom out ticket purchases and marvel at café culture par excellence. Supper was in a comfortable school with a delicious homemade buffet of delightful Dutch stuff (the meatballs were magnificent!) with some very welcome bottles of excellent beer. A relaxed Andy A had scouted bars for us, Rod/Ryan eventually parked the car and a relieved Andy Y arrived after an eventful journey. Lots of chitchat with our hospitable hosts, guests Benfieldside and Durham Rams Morris and Sword Men and Mr & Mrs Squireofthering (Alison & Peter Simpson). We were soon nodding off into our ragout and the squire called a welcome early return to the tents. A token night cap and we were all tucked up nice & early, the squire leading the way.

A nippy night, any grogginess quickly dispelled by blessed early coffee, good showers and egg/bacon breakfast. An industrious hat decoration workshop completed and off to the train.

Flower market first venue, already hot so our dang fool ‘helped’ everyone by getting out the ever present water pistol… 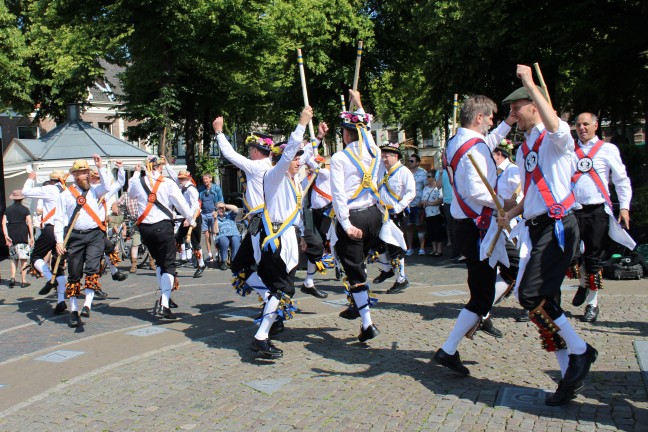 Our second spot was close to the main church with its delightful, but loud and long bells – what a cacophony with our bells. Up came the horse in spritely fashion (and promptly fell over) while the lads found the only Utrecht bar that didn’t serve alcohol. Quickly moved on to next bar, that did! 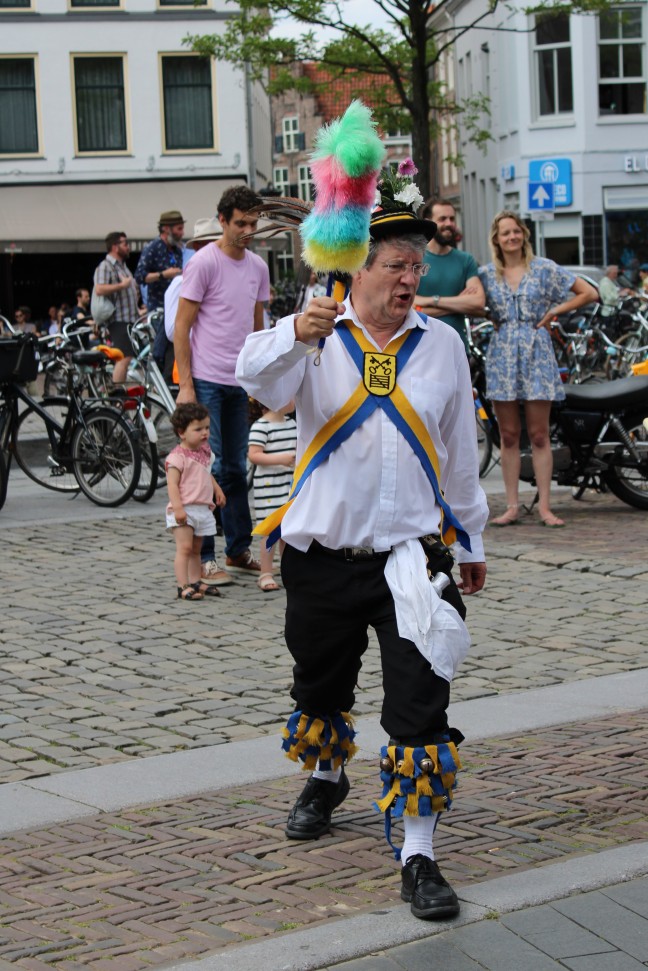 Off to the Mariaplaats, good crowds and some fine dancing from all the sides, with the brute enjoying the folk seated on the benches. Alison’s clogging added a welcome different dimension to the performances. 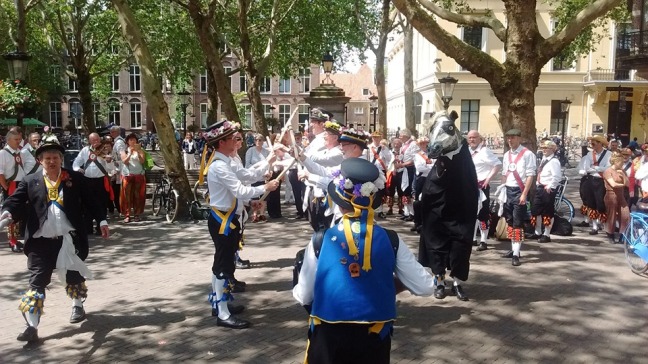 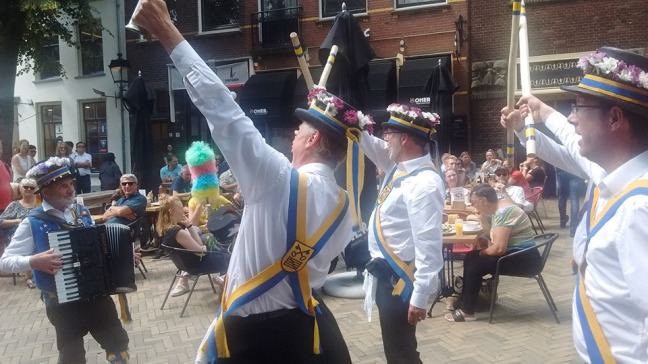 Off to lunch – the prestigious Lebowski Bar with a private room upstairs. Fantastic venue and atmosphere, much mingling, jollity and extended singing form Benfieldside (great singers, much admired by us). Some of Yateley were on a beer fuelled mission to get a discount on a jug of beer – persistence did eventually pay off. Lovely food, burgers, French toast with dips and cheese & pear pizza. Beer was good as well, singers getting a free one – Tim earnt his from ‘Hal an Tow’. We stumbled out, molesting a stuff ostrich on the way, to witness the arrest of a street preacher. 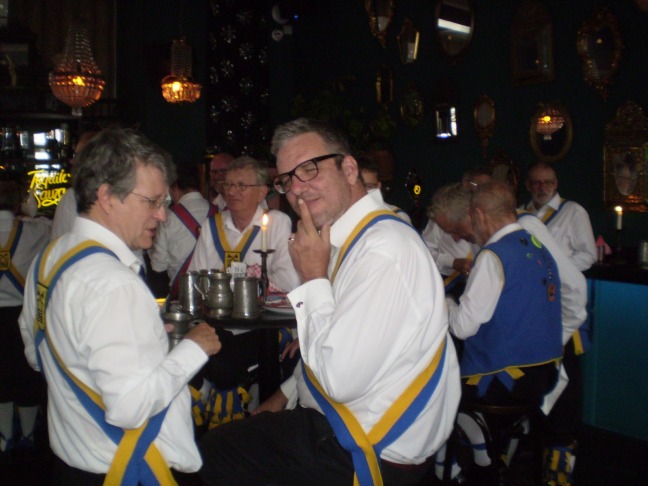 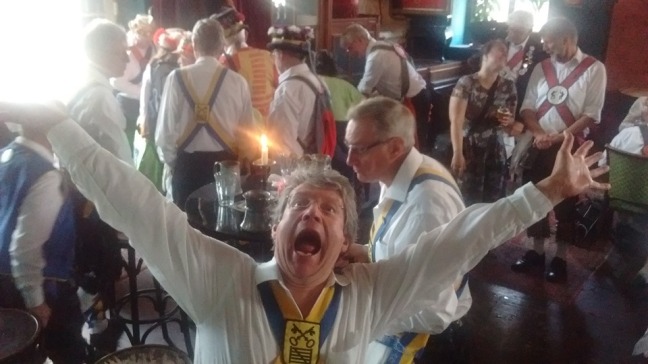 An enthusiastic and noisy, if not precise, set followed outside, clogging up the street nicely. 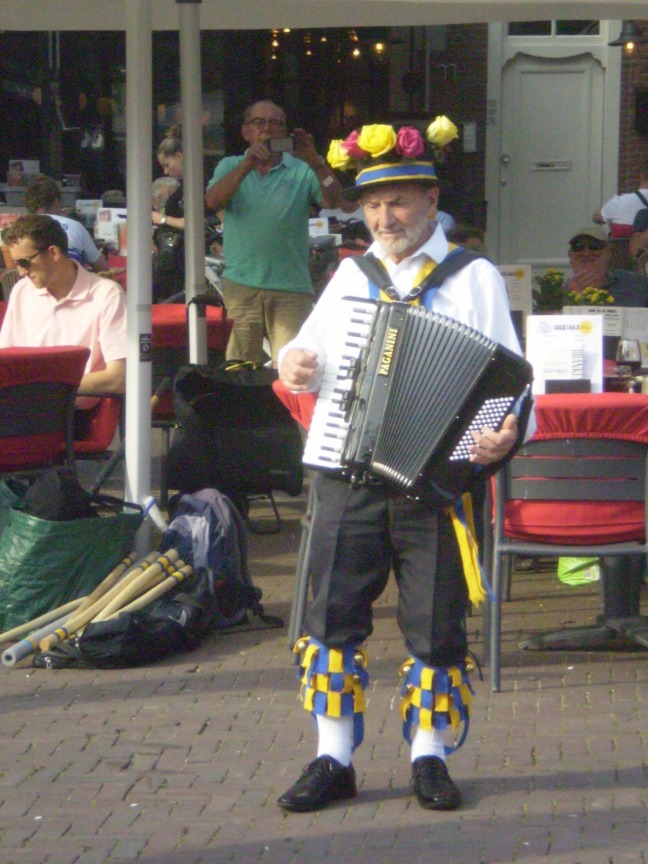 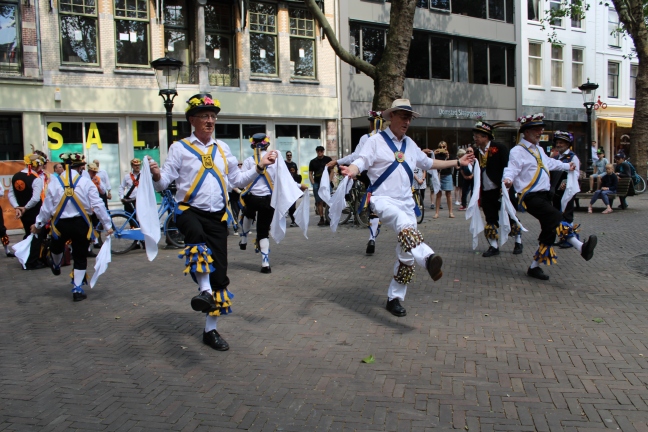 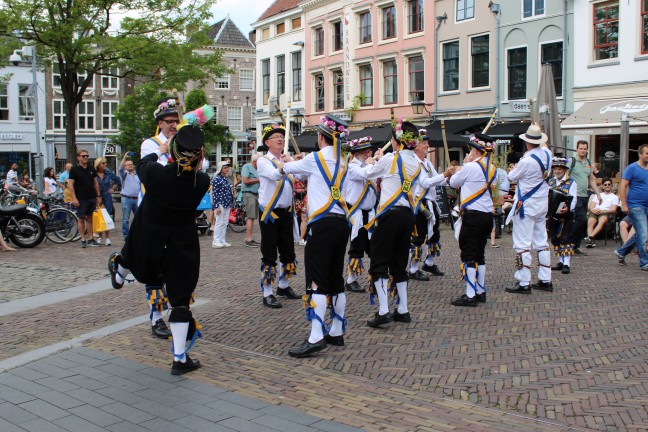 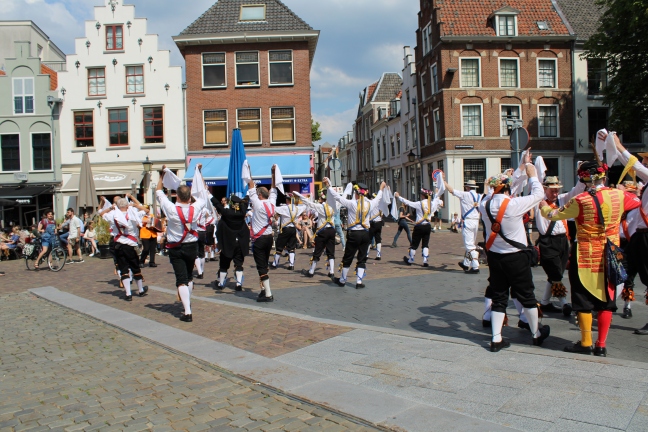 Onto the final spot before the Formal Feast (oh dear…), Utrecht MM’s local bar which we liked a lot, friendly locals, friendly owners (who fed us bittenbol) and some pleasing dancing (including an ambitious Signposts). We had a bad 15 mins when we thought we had lost the beast…..

Onto the final spot (for most of us) the Ring Feast, a wonderful venue at the Railway Museum set in a magnificently re-furbed railway station. Beer tokens were distributed and all sides settled down for a quiet, decorous and refined meal… It wasn’t long before YMM disgraced themselves – water pistols, pairs of sodden hankies being thrown around and snoring through the speeches being the least of our misdemeanours. A great feast – delicious Indonesian influenced Dutch food (satay and rendang), lovely beer, warm speeches, good fellowship, good songs (Tim leading a warped Hearts of Oak and Andy P doing Barley Mow), our Fool leading the Immortal Memory toast – well done S of the R and Utrecht. Unable to guzzle or scoff any more, most of us headed off on a long hike home, but some miscreants headed back into Utrecht….

Glad to get to the campsite for a sociable quick port and/or Talisker nightcap with our new discoball, only to be woken up by the stumbling miscreants later – one of which had real trouble getting his morris socks off…15 mins of entertaining rolling around on his back. And so to sleep.

Slow,leisurely start after the night before the hard graft of packing up the campsite, Tom having an extra nap having dropped off while stuffing his rucksack.

Got the last parking spaces close to the meeting point for the canal boat, much to the chagrin of the locals. Fantastic 90 min tour through the Utrecht canals with local info and beer supplied by the Utrecht Morrismen…… never knew Utrecht could look like Amsterdam (without the tourists)

Farewell show dancing in the afternoon outside a cafe overlooking the canal. Much horsing by ‘he who must not be named’ almost finished off the beast in the heat. Audience were well amused and somewhat bemused when Yateley danced maid of the mill Illmington with national flags and wearing politicians masks. Some of the audience recognised the players but other faces were beyond them.

The confusion of British politicians and their inability to work together was very apparent by dancers being caught up in the flags and unable to see in front of themselves whilst wearing the masks. Standing away from the dancers/politicians on her own with her face ‘tripping’ her was Theresa May, AKA Rod…. very appropriate and much to Rod’s dismay that he was her representative…… master stroke by the Squire. 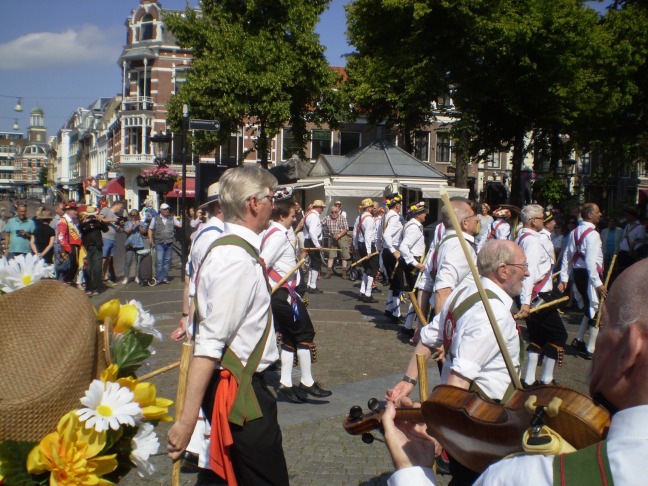 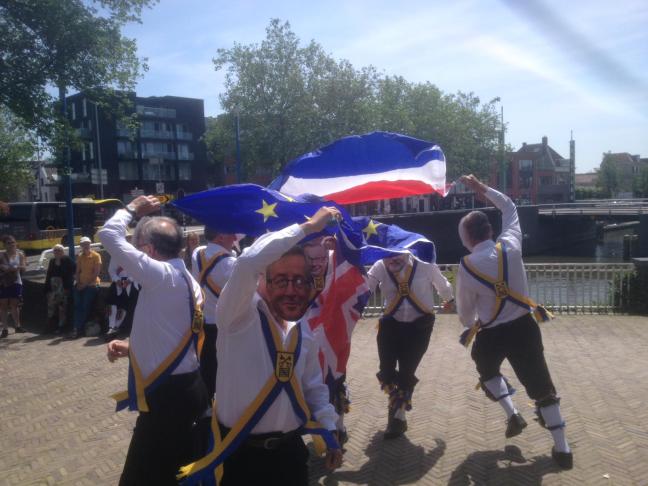 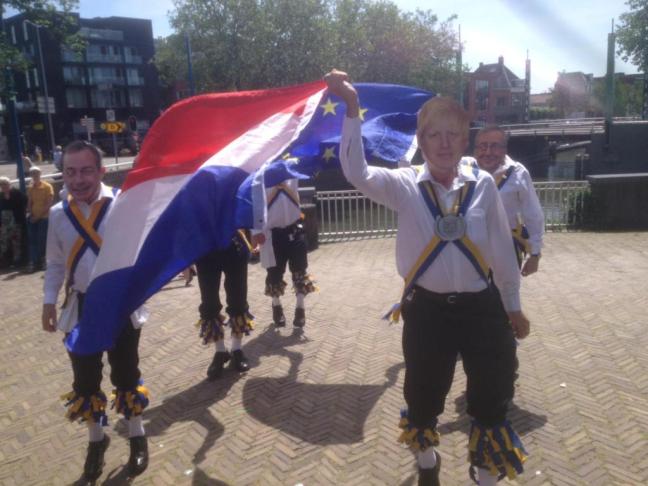 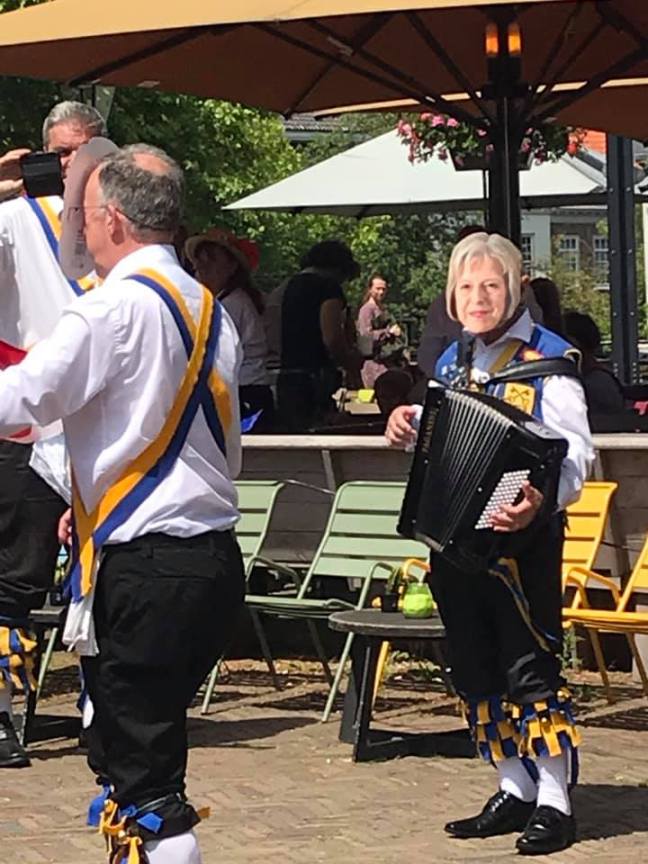 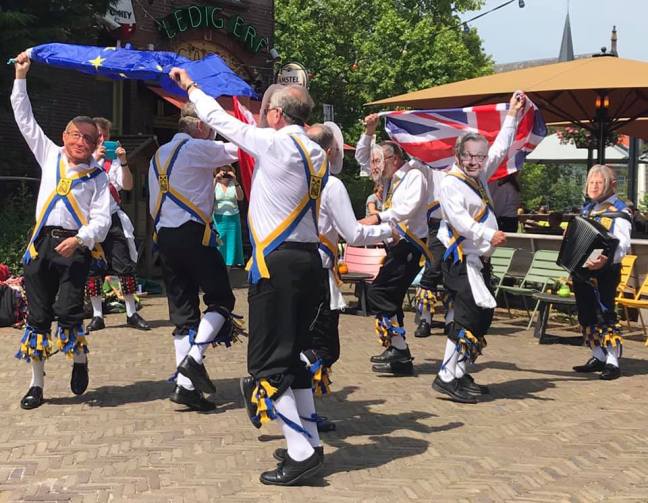 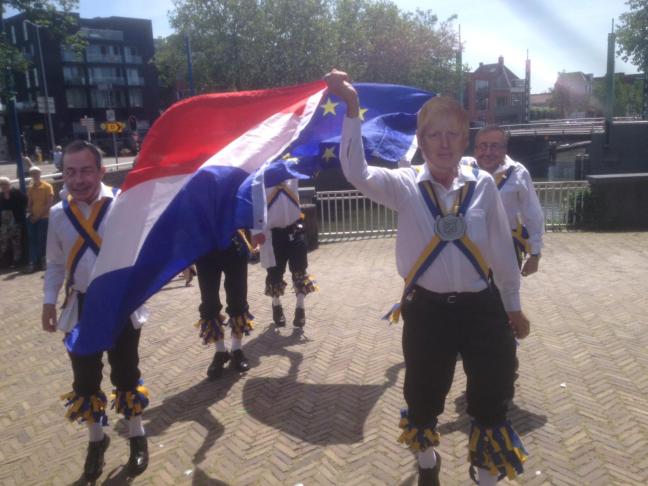 Farewells and good byes we prepared to head off. An excellent Ring Meeting, well done Utrecht and Peter, we had a great time in the city. We thoroughly enjoyed strengthening our friendship with Utrecht and Helmond, plus getting to know the talented lads of Benfieldside. We lost Andy A and Andy at this time as they headed home.