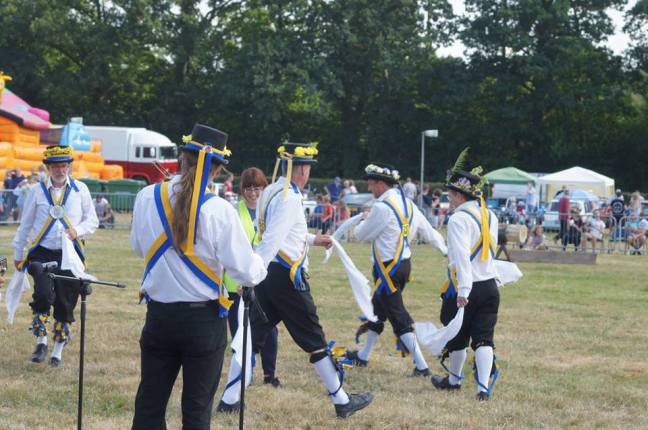 The previous couple of shows had suffered from poor weather and this had put the public off. Not today though! A beautiful warm, sunny day turned into a real scorcher. After a quick beer, we opened proceedings in the main arena – always tricky for Morris dancing as it is very hard to get feedback from the crowd and build a rapport. Cow pats and grass made for an interesting dance surface and we nearly lost the Bagman in the first dance. A warm horse patrolled the fence, nipping at nippers. We were a bare six dancers and needed to catch a few gasping breaths between dances! The Fool was told to ‘blather’ (a new word for us now meaning ‘to present the Morris performances in a scholarly, knowledgeable and amusing manner’)  into the microphone at length. He quickly shed his cosy wool frock coat.  Blather and performance must have worked as we kept the happily clapping crowd. Fine support again from our musicians Steve Betts and Chris Bartlett who were without the injured Rod and were undaunted by playing before a huge crowd.

A break and off to the beer tent – long queues, but the Golden Muddler from Andwells was delicious. A few gluttons went for the hog roast pulled pork baps, also rather good. The programme by now was moving (lost falcons and over-running events) but the lovely Jenny kept us up to date.

We followed the classic cars, another group of old British classics in the arena… Oil spots now joining the cow pats as stepping hazards. More good dancing with Jenny joining us our Eynsham Maid of the Mill. Final dance was Bampton’s Bonny Green Garters and we eventually enticed a fair number of folk over the barriers to join in. A good finish, the dancing was very good (especially as we were dancing a field), as was the overall performance.