Phew what a scorcher…the days heat had not abated by the time we started. The Fool soon cast off his cosy padded woollen frock coat to reveal his politically incorrect black shirt and we were off! A small but select crowd at this fantastic location – what a glorious spot, can’t understand why the garden wasn’t seething. Perhaps the large dog who noisily indicated he wanted to eat my bells. Laid back dancing in the large car park, with just enough dancers to do 8 man dances.

Fine support from our musicians Steve Betts and Chris Bartlett – well done. Good beers and at much better prices than we had expected. We’ll be back! 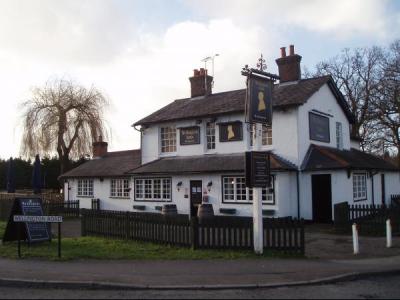 Off to the Wellington Arms, another old favourite pubs of Yateley, interesting to see the Brakspears signs so prominently displayed. The Wellington was seething with happy diners and drinkers, making the most of the huge outside decking and garden area. We opted to dance in the centre of the decking – good call – and were able to give the audience a real up close performance, you know – sweat, profanities and flying spittle… Much applause and hooting from the audience! Small dance area, always fun to squeeze dances into a tight space.

Hooting and hollering increased as The World Famous Yateley Horse appeared from the darkness, making friends with the young fillies in the crowd. He happily stumbled around, snuggling up to anyone who would let him. What an asset. Hat passed by Peter and our enthusiastic crowd was also a generous one. The Fools birthday imminent, so more beers and a song followed by general chat as the lads enjoyed the dark, balmy evening.

Nice to be local at this end of the season. A busy period coming – Swallowfield Show, Dog & Partridge/ The Chequers, Fox and Goose Greywell, Highclere Castle, Yateley Cask & Cork Festival, Day of Dance and a Yateley Morris Men Open Evening all to look forward to!