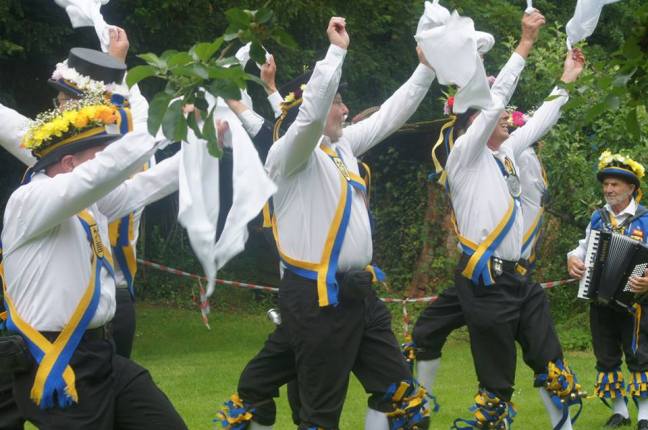 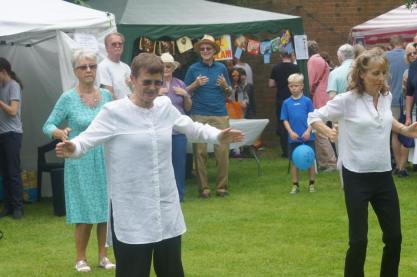 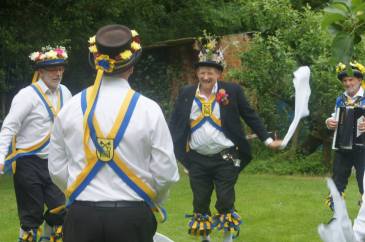 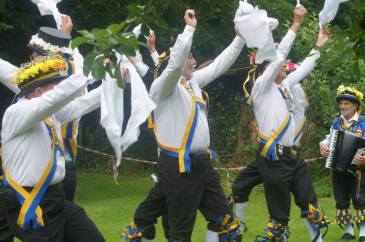 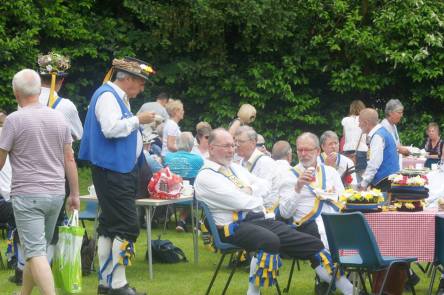 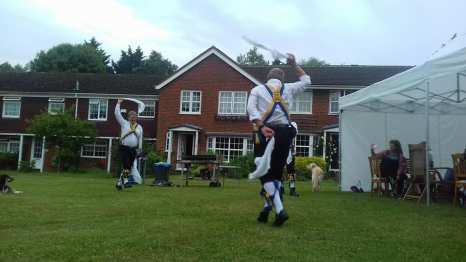 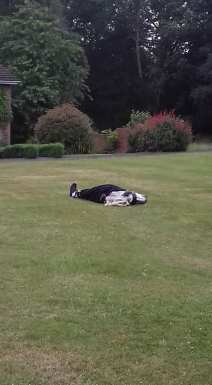 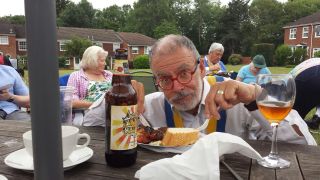 So what better than a family orientated church Fete in Swallowfield? Quintessential Englishness!

As in previous years we danced-in the start of the Fete after the cutting of the opening tape, this year by the Punch and Judy magician.

Weather was sunny and warm and we started with some half dozen rousing dances in the cafe area, again managing two sets with a magnificent 12 dancers. Great to see our Rod out in kit!

After tea and cakes (multiple cakes for Chris B!) the side transferred to the main arena and demonstrated some more traditional Cotswold dances. A speculative auction of a tankard by the Fool raised some more funds for the church ……………ably boosted by some early Yateley Morris bidding. Final joining in dance, then final swigging of tinnies and we were off.

The side then moved off to the Squire’s mansion grounds for a BBQ and some more refreshment. The BBQ kings being Phil,Chris and Tom who turned and timed the food and received 2nd degree burns in the process.

The assembled friends and family all seemed to have their fill! Speaking of the assembled it should be noted the support from the Yateley wives. Kate, Sue, Kathy, Jill and Jill, Janet, Jinny, Hazel, Jackie, Julie and for the first time Carol. Watch out lads soon we will have more ladies supporting than dancers!

At Squire’s mansion we had sunshine and rain, that said however the rain drove us into the tent for a songs and music session and when the rain abated we moved outside for jigs and dancing.Not the best example of full kit and style but the audience enjoyed the show, especially the additional two lady dancers at the head of the set with the brooms and mops.

We finished with our now traditional ‘joining-in dance’ which was well supported by the kids and parents. We hope Joan (Squire’s Mum) did not mind sharing her birthday with the Yateley Morris Men.

Guest appearance by Elliott was great to see and a short foray in the horse ensued but with no broken bones this time. However it should be noted that on another occasion the horse became exceedingly excited by the presence of our hostess and indeed needed a cooling splash of water in the face to cool his ardour.

A great day out and a two superb venues. Many, many thanks to Andy and Kath for putting a brill BBQ.

Roll on next year!