Favourite YMM phrases ‘We’ve been invited to a brewery!’ and ‘Refreshments will be provided!’. Happy, happy YMM. What a great harvest celebration for the hop picking – good balmy weather, great beer (Green Tea was our pick!), amiable crowds and good music. A good turnout from the lads and our ever lovely WAGs. 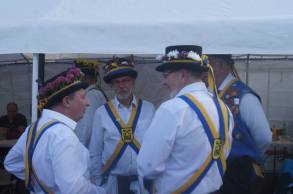 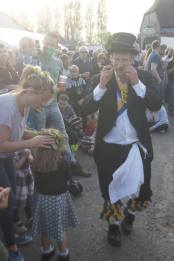 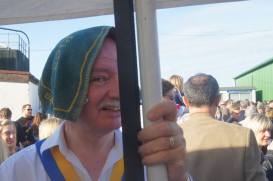 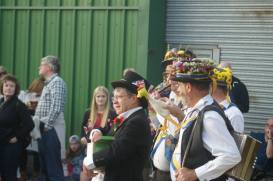 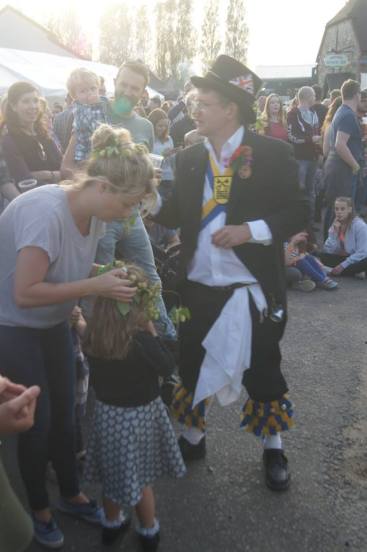 Fool and Ryan and WFYH arrived in style in a burbling, crackling 5L yellow monster of an opentop TVR turning all heads. The complimentary barrel of beer was found behind the stage and imbibing began….Yateley were as happy as pigs in clover and soon had snouts in the beery trough. ‘Green Tea’ had fresh hops added to the barrels, for a very good fresh flavour, Some of the bands must have been thirsty as the barrel was soon drained, Fool and Ian rose to the occasion and, Oliver Twist like, asked for more.

Squire had put together a good programme and we danced well to an interested crowd at the front of the stage, with our gobby fool as MC contentedly blathering into the roving mic. Upton and Skirmish seemed to be the pick for the day. We happily filled in as the bands swopped over, providing the bands with unbroken entertainment. Horse was happily lost in the crowd making new friends and terrifying toddlers. Our musicians did brilliantly all day. The Fool had a pewter tankard prize for anyone who could name the hop variety in his hat – it was ‘Wye Challenger’ and no-one got it, despite many guesses. Tankard was given away anyway!

Outcast Band were great, we have connections – they played at one of Paul Montague’s birthday bashes c.1995 at Camberley FC, they remembered that gig . Our Fool had brought an old Outcast CD along for them to sign – they seemed rather touched and amused. Even more amused to find that they had ALREADY signed the CD back in ’95! Doh! Great set, all the best to you! Crowd were much amused when Squire and Fool started dancing with the mob of toddlers in front of the stage. Aaaah!

Paul’s birthday weekend and he had laid on supper at the White Hart, really nice food at a buzzing pub with some real interesting beers

Lovely day, great to support a local brewery and business. Hope we go back!