The publicity said ‘come rain or shine’, plenty of the former and none of the later. We were joined by  Fleur De Lys who arrived in good form and in good numbers. The YMM old lags reckoned there would be no dancing tonight and anticipated a beery 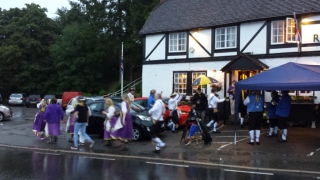 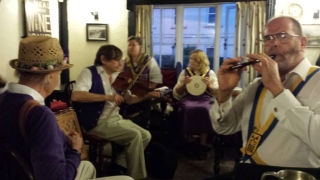 evening in the comfy and dry, however the enterprising landlord had a put a huge pop up gazebo at the front for us to dance under. Really nice touch.

A sparkly Fleur De Lys went on first dispelling the gloom and fug, enticing a number of locals out from the pub. Very entertaining, as they squeezed 8+ dancers plus musicians undercover, with a variety of dances, but no staves (holes in gazebo canopy!).  Yateley responded with some 8 man Adderbury, but the small sets of Bampton and Ilmington more popular. The game of the day was to push the roof with sticks causing a deluge to pour over the sides onto hapless victims! And still it rained….. That strange ‘eau de morris’ miasma started to rise…and accusing eyes turned to the Fool’s frockcoat. The Horse wisely stayed in….the smell off of him when wet is more than pungent. YMM dancing was relaxed (to say the least). Final joinnyinny dance was popular with all sorts and weaved through the cars and into the pub.

Off into the pub for a music and song session, with the even the squire singing! Fears about the Greene King beers (not our favourite) were allayed – Olde Trip was really nice. Good to catchup with some good lads from the old Cuphill MM.

Thank you FDL and the staff at the Royal Oak for a transforming a soggy old evening into something much more fun!