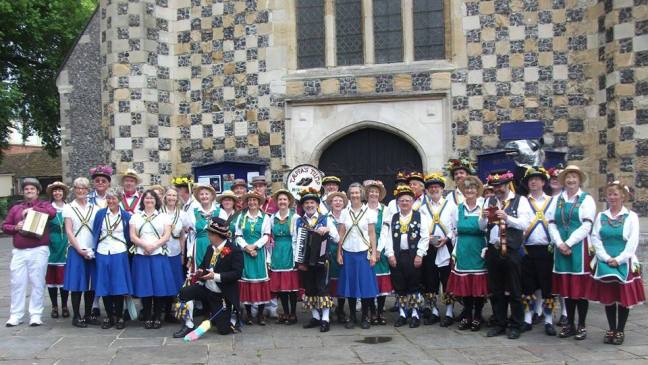 Fabulous weather continued as 13 sides congregated in Reading to do our ole mates Kennet proud on their 60th!

YMM mainly travelled by train, with groups joining at Blackwater, Sandhurst and Wokingham. Rather nice. Headed off with confidence to the wrong Wetherspoons (!) before finding the right one. Only us and Phil Davies (good to see you Phil!) from the morris fraternity. Breakfast called and the rather harassed bar staff stumbled though b’fast and beer orders. All went well and it was soon happy YMM snouts in the breakfast trough, snufflin’ and guzzlin’ contentedly. A quick beer for the road and it was a short stroll to our first stop at the Minster. 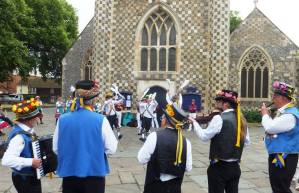 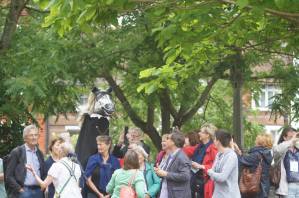 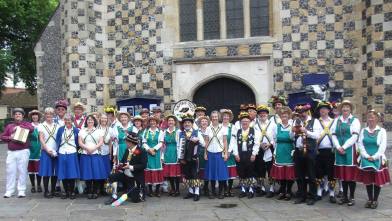 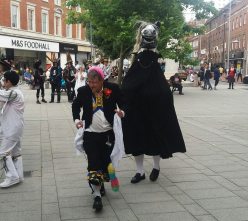 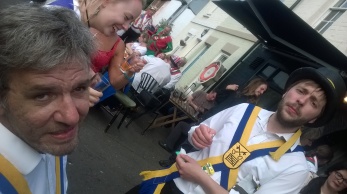 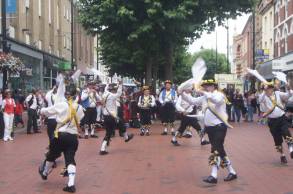 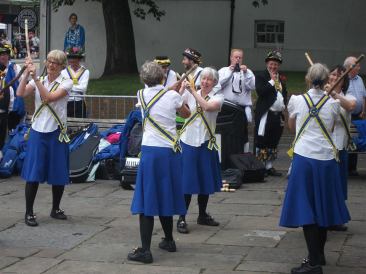 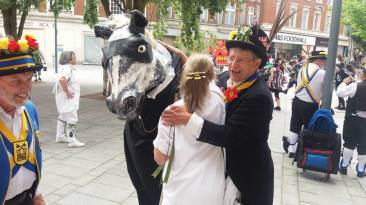 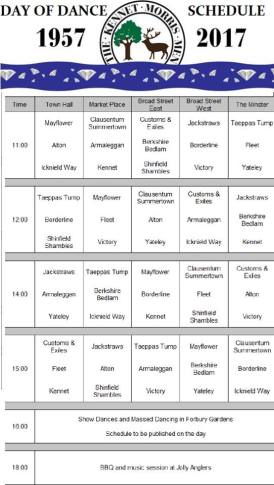 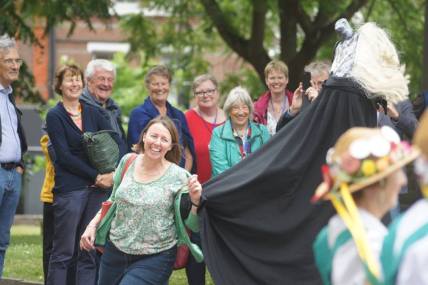 Joined by the lovely ladies of Taeppa’s Tump and Fleet (both in very good form) with whom we shared a very pleasant spot. We liked Fleet’s triangular version of (we think!) Bampton’s ‘Highland Mary’ a lot. The Fool was determined to ‘help and assist’ Fleet which included Shepherd’s Hey, soon aided and abetted by the Beast! A German choral group were surprised by the Beast who snuck up on them…… A curious and interested international crowd came and went with smartphones flashing away.

Off to Broad Street, via a good pub with tremendous beers (so good that we had to return a few times!), to dance with a youthful and bouncy Summertown/Clausentum combo and the equally spritely Alton Morris. A family affair, with one extended family providing three dancers for YMM, one for Alton and one for Customs and Exiles. A good display of the morris followed, with a steady stream of shoppers being greeted by horse and ticking stick.

Thirsty now, it was off to the wrong ‘Spoons (not even a ‘Spoons as it turned out) for more beer and Greggs grub for the peeegs. Erudite morrissy conversation with Summertown followed between slurping of cheap beers sat in the sun outside.

Next stop was very close to the Hope Tap, so close that we returned for a couple more. We danced with Armaleggan and Jackstraws – both dancing well, for a great set. Inexplicably we had positioned ourselves in a corner, well away from any spectators! YMM and Jackstraws know each other well and liberties were taken – a very happy four legged horse, a surprised semi mounted horse,  a pink tiara on the YMM Fool (and Horse!) and wobbly sticks! Armaleggan were a really nice bunch as well, it would be good to see them again.

Back to Broad Street with Mayflower and Berkshire Bedlam. All three sides put on some pretty spectacular stuff, filling the big dance area. Good performances from all. Some of the lads in trouble with Andy for sloping off for re-fills at the wrong time. YMM in pretty relaxed mode by now….. Note had been made of the Fool’s far from white shirt……more later.

A short stroll, via the pub, to Norbury Gardens for a final fling from all the sides. It was great to meet up with friends we hadn’t yet bumped into. Happy chaos reigned as show and mass dances filled the centre. A mass Vandals was a real hoot! It seemed that many of the sides were as relaxed as we were… The Fool’s cream shirt retirement from the morris was hastened by a sleeve being ripped off, followed by most of the buttons – Fool Abuse! The Horse suddenly got an urge to romp and was all over Norbury Gardens like a rash with a puffin’ Fool trying to keep up! Bonny Green concluded the dancing with a bemused Fool leading the scores of dancers off towards the bandstand for the mass photo.

Most of YMM wisely headed home with a thirsty hardcore hiking to the Anglers on the canal for more beer and a barbecue, turning down some proffered drugs on the way. Really. Morris flotsam and jetsam had washed up at the pub, all eagerly swamping the tiny bar, what a scrum! A bit of a zoo… Beer was great, a mini festival. Ryan was surprised to find that he was sharing his beer with a thieving local – ‘I thought you’d gone!’.  Andy refused to buy Sauvignon Blanc, despite persistence. Sausages and hog roast appeared – delicious. More beer and eventual spouting of complete drivel. Shots appeared which we mostly avoided… Last remnants limped back unsteadily to the station. Oh dear…a kebab…at Blackwater station.