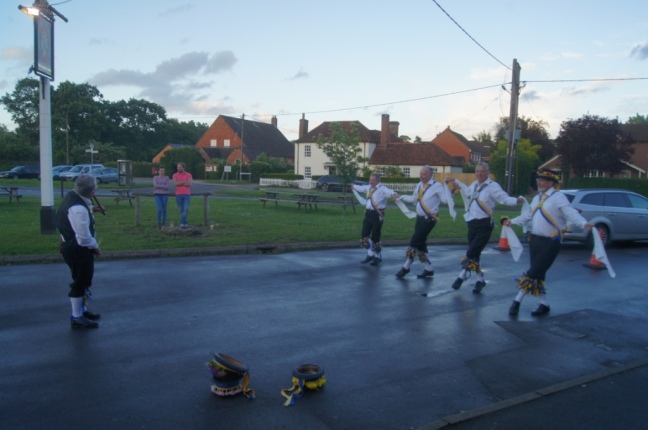 Things looked very promising as we arrived at The Calleva Arms where the landlady had coned off a large area right outside the entrance to the pub. At least they were expecting us. The Squire had bent the Bagman’s arm to persuade him to find a pub closer to the second spot at The Plough. It looked like the arm bending had paid off. And not another Morris side in sight – this time! A reasonable selection of beers, including HSB, quenched our thirst as we headed outside to perform in the wind. At least it wasn’t raining any more. A handful of spectators came out to watch including some Morris virgins – by that I mean they hadn’t seen Morris dancing before! We took away their virginity with an excellent display including possibly the best Milly’s Bequest ever. The doubling up figure was spot on!

And then we made our way down the road to Little London and The Plough. Again the landlord had prepared well with a coned off area outside the door. If he was worried about cars parking there he perhaps needn’t have bothered. The only customers appeared to be two tables full of old blokes playing cribbage. Needless to say they stuck to their cards so we ended up dancing for ourselves. Nevertheless another fine display ensued including an almost faultless Old Molly Oxford from Fieldtown. A look of absolute bewilderment on the faces of some of the dancers disappeared when the Squire translated it to Stepback. Ohhh…they all muttered as they lined up to dance! As we prepared to head inside the landlord appeared with a generous load of baked potatoes, sausages and sandwiches – a fine reward which was very much welcomed. We showed our appreciation with a rousing music and singing session which we all enjoyed. Some excellent singing by several members of the side and yes – even the Squire burst into song! Whatever next!!!

One thought on “June 6th: The Calleva Arms, Silchester and The Plough, Little London.”