Our second day out on this very busy Queen’s birthday weekend. Yesterday 3 spots – today 2 spots. Our first appearance at 2.00pm was at the VE Day celebration organised by The Yateley Lions on the Green in Yateley. When we arrived there were still a number of gazebos in the process of being set up and it seemed that the party had not quite kicked off.

However quite a few folk were wandering around in vintage wartime clothing and the band was playing wartime style music so the atmosphere was very appropriate for the occasion. We were not quite sure where Morris Dancing fitted in with wartime commemorative celebrations but nevertheless we were happy to oblige. A small audience gathered to watch us as we performed a medley of Adderbury, Ilmington and Bampton dances. After a short while the band started up and we realised that there would not be an opportunity to dance again so we headed off to our second spot. 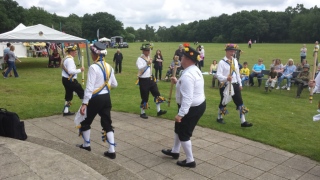 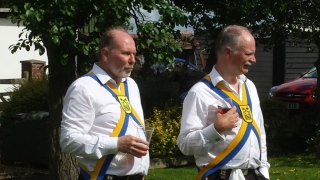 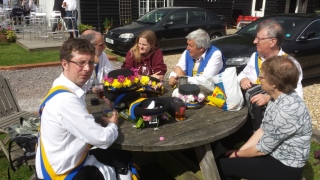 This was The Magpie & Parrot Queen’s Birthday Celebration in Shinfield. We arrived around 3.00pm and promptly filled out tankards with free beer generously supplied by Carole. There was only one dance we could open with – yes ‘Landlady Filled the Flowing Bowl’ We performed about 6 dances to a very enthusiastic audience who were keen to get into the spirit of things – or maybe that was just the alcohol taking effect! The horse met his match with a number of dogs barking ferociously which caused the horse to fall over backwards much to the delight of onlookers. Luckily when I spoke to the horse he told me only his pride had been hurt!

Worth mentioning the fine selection of ales from a new Wokingham based brewery called Bond Brews. 5 different ales on tap – 4 were delicious – I don’t know about the porter as it had run out before I got to it!

We also put up a YMM team in the Aunt Sally completion – and guess what? – we won! Mind you we had were very fortunate to have a grand master in our team – Monty had kindly driven down from Bampton to help out for the day and it turned out he was a bit of an expert at the game – well it is a Cotswold Olympic sport.

All in all a good day out. Just one day off before our next appearance in Swallowfield on Tuesday and then off to Teignmouth folk festival for the weekend. The busy season is truly upon us!